In a broadly down market, globally, Sound Shore’s second quarter 2022 results were ahead of the S&P 500 Index (“S&P 500”) but behind the Russell 1000 Value Index (for the Fund's most recent standardized performance information, click here). Higher inflation, rising interest rates and a slowing economy pushed the S&P 500 into bear market territory. The S&P 500 closed down 16.1% for 2Q, the worst second quarter performance since 1970 (down 18.0%). Similarly, the technology focused NASDAQ, small cap Russell 2000 and MSCI World indices fell precipitously. Equity investors had plenty of company as within major asset classes, only the US dollar and US Treasuries finished up.

How long this weakness will persist and whether we are headed toward a recession are being debated by economic prognosticators. At Sound Shore, we remain focused on the data we get from our company specific research. Key factors to watch will be how consumers adjust their spending due to inflation (June’s Consumer Confidence level was at a 16-month low) and if the two expected 0.75% Fed interest rate increases (July 27 and Sept. 21, 2022) will help ease the pain of the highest inflation readings in a very long time.

The selloff was broad with all eleven S&P sectors finishing lower. The consumer discretionary and financial services sectors were some of the hardest hit. Despite solid current profits and cash flow, portfolio holdings General Motors (autos) and PVH Corp (apparel) were lower as the market questioned the consumer’s resiliency. And, as is often the case in a volatile market, financials sold off in response to rising credit concerns. Morgan Stanley and SVB Financial (“SVB”), both long-term holdings, retreated despite having business models that are more resilient, over-capitalized and underappreciated by the market. In June, the Federal Reserve’s stress tests again blessed the health of the overall banking system. Morgan Stanley stood out with an 11% increase in its annual dividend, yielding 4.1% at quarter’s end. The weakest performer in the quarter among our group of financials was SVB. Given the strength of its loan portfolio, best-in-class deposit growth, and an asset mix that benefits from rising interest rates, we added to the position at below 10 times our estimate for 2023 earnings. We took similar action during the stock’s sell-off in early 2020, and recognize that patience may be required.

Another detractor was homebuilder Lennar, one of the industry’s largest. We added the name during the fourth quarter of 2018 market selloff when Lennar was trading below normal at 7.5 times earnings and 1.1 times tangible book value. We believed the company had scale-driven advantages over small and mid-size builders, and also less exposure to sluggish premium housing trends versus its competitors. Since the end of 2018, Lennar’s net debt to capital has declined from 32% to 13% in the most recent quarter. The increased cash flow has also enabled more than $2.1B of stock repurchases over the past four quarters. Lennar plans to simplify its portfolio to focus more as a pure-play builder, with less asset intensity, which we believe will increase returns on capital and cash flow.

After material outperformance in 2020 and 2021, during which we trimmed our exposure, Lennar has been hit hard in 2022 by the sharp increase in interest rates, adding to concerns around home affordability. Given the selloff this year, Lennar’s valuation has fallen to 4 times earnings and price to tangible book value retreated back to 1.1 times at the end of June, despite the company earning an approximate 30% return on tangible equity over the past year. While the short-term outlook for housing is clouded by a potential pause in activity due to mortgage rate shock, the limited supply of housing has never been more severe, as illustrated in the chart below. Housing is an example of an industry that has entered this point in the cycle in a different position than in the past, as recession scenarios are estimated by the market. Not unlike the auto sector, which has low inventories and has been producing below the normal long-term trend since 2020, the housing market is under-supplied. Despite the likely short-term slowdown implied by the changing economic outlook, our team is confident in Lennar’s balance sheet, strategy, and management team and we added to the position during the quarter. 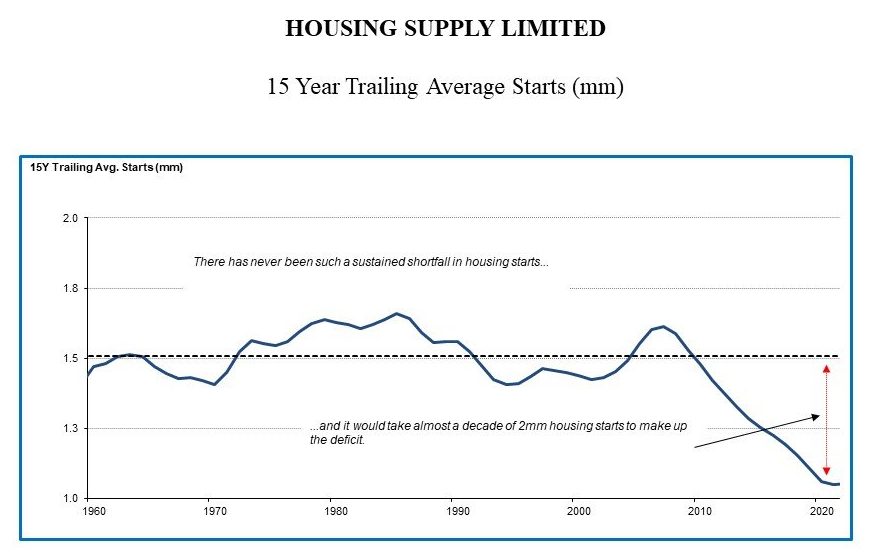 On the positive side, a number of our health care names outperformed, including drug maker Merck & Co. and health product supplier Perrigo. Benefitting from a best in class research and development team, Merck’s progress is being fueled by the impressive growth of its immuno-oncology cancer drug, Keytruda. The stock remains attractive at less than 12 times 2023 earnings. Meanwhile, Perrigo is the leading private label and branded drug manufacturer with a market share of approximately 70%. Consumers may not realize it, but the store brand Tylenol, Allegra, Prilosec, etc. that they purchase is likely produced by Perrigo. Having navigated through supply chain disruptions during the pandemic, management is aimed at growth and margin improvement and we see significant upside potential from here.

With nearly 45 years of experience and having been through numerous market cycles, we remain alert in this volatile environment. Our contrarian investment philosophy has always focused on finding attractively valued companies with internally driven earnings that can drive value for years to come. Our long-term investment process looks forward to assess where a company’s normal earning power will be. In fact, it is often periods of uncertainty which create the best opportunities for our strategy. This leads us to stocks with management teams employing strategies that are durable and have sustainable businesses we want to partner with in our portfolio. The ability to have a long-term view is increasingly rare, but will likely determine our success.

Although there may not be a quick resolution to the current environment, we believe that stock prices will increasingly begin to discount the complex macro outlook. Patience will be tested and we must rely on our process, our resolve and our conviction. When the market senses uncertainty, equities fall sharply and in unison, without regard to fundamentals or an eye to the future. As confidence returns, quality at an attractive price will likely outperform. At Sound Shore, we believe our portfolio is well positioned for trends that are liable to emerge, post-crisis. The table below outlines performance following steep market declines. The future may not repeat the past, however the opportunity for patient investors is potentially a good one.

Currently, our portfolio is attractively valued at an average twelve month forward P/E ratio of 8.8 times versus the S&P 500 of 15.8 times and the Russell 1000 Value of 12.5 times. We appreciate your investment alongside ours and encourage you to reach out with any questions or comments.

Thank you for your investment alongside ours in Sound Shore.

An investment in the Fund is subject to risk, including the possible loss of principal amount invested. Mid Cap Risk: Securities of medium sized companies may be more volatile and more difficult to liquidate during market downturns than securities of large, more widely traded companies. Foreign Securities Risk: The Fund may invest in foreign securities primarily in the form of American Depositary Receipts. Investing in the securities of foreign issuers also involves certain special risks, which are not typically associated with investing in U.S. dollar-denominated securities or quoted securities of U.S. issuers including increased risks of adverse issuer, political, regulatory, market or economic developments, changes in currency rates and in exchange control regulations. The Fund is also subject to other risks, including, but not limited to, risks associated with value investing.

The Adviser analyzes risk on a company-by-company basis. The Adviser considers governance as well as environmental and social factors (ESG) as appropriate. While valuation, governance, environmental and social factors are analyzed, the evaluation of all key investment considerations is industry- and company-specific. Consequently, no one issue necessarily disqualifies a company from investment and no individual characteristic must be present prior to investment.

The views in this letter were those of the Fund managers as of 6/30/22 and may not necessarily reflect their views on the date this letter is first published or anytime thereafter.

This commentary may contain discussions about certain investments both held and not held in the portfolio. Current and future portfolio holdings are subject to risk. For the Fund’s Top 10 Holdings click here.

We entered 2022 anticipating that the Federal Reserve would raise interest rates and with consumers feeling the bite of rising prices at the pump and the grocery store.  Over more than four decades of managing portfolios we've observed that the Fed's transition to increasing rates requires investor patience, while keeping a keen eye on the impact it has on the economy.  This time is likely no different.  As inflation began tracking higher than Fed expectations, the market priced in more aggressive central bank tightening and investors braced for a slowing economy.  Meanwhile, continued supply chain disruption and climbing oil prices...

Equity markets advanced briskly during the year as investors were encouraged by a recovering global economy and solid corporate earnings growth.  All eleven Standard & Poor's 500 Index sectors posted double-digit gains.  Growth stocks finished the year with a surge in the fourth quarter, outpacing value stocks and the broader market.  While disappointed that we gave back some of our performance advantage over the broader indices in the last three months of the year, we remain undeterred.  Since 1978, Sound Shore Management's contrarian investment philosophy has focused on finding inexpensive, out-of-favor stocks with internally driven earnings and free cash flow...

After a significant surge over the last twelve months through May, stocks were mixed in the third quarter of 2021.  Buoyant first half 2021 GDP growth of more than 6% persuaded the Federal Reserve to indicate tapering could begin later this year, with rate increases to follow as soon as 2022.  That guidance left the market uneasy.  Compounded with uncertainty around COVID-19, supply chain disruptions, rising inflation and Congressional gridlock, a cyclical selloff unfolded throughout the summer.  As a result, the industrial, material and energy sectors all finished lower for the quarter. Volatility, often driven by short-term market participants, creates...

Strong corporate profits and resurgent consumer spending helped drive our strong performance in the second quarter. Investor confidence remained strong due to reopening economies and despite interest rate and inflation concerns. However, performance narrowed vs. the S&P 500 during June, favoring growth stocks, after the US Federal Reserve indicated it could be tightening as soon as 2022. The current environment is yielding ample investment opportunities for Sound Shore's bottom up, contrarian strategy. Sound Shore's process, time-tested over the last 43 years, starts with a screen to identify the least expensive stocks based upon earnings and cash flow. We then conduct...

The Sound Shore Fund's strong first quarter 2021 gain was just ahead of the Russell Value. Stocks continued their recovery to start the year as investors were encouraged by an accommodative Federal Reserve, passage of the American Rescue Plan Act and continued rollout of COVID-19 vaccines. Meanwhile, solid corporate earnings backed up these macro factors. Participation was broad with all 11 S&P 500 sectors solidly in positive territory, led by the energy and financials sectors. The portfolio's return was driven by 11 holdings from five different sectors that were each up 20% or more for the period: Applied Materials, Bank...
Scroll To Top